If you’ve seen the trailers for The Gift you may be confused as to what sort of film you are seeing. It was certainly difficult to describe to people. Was it a horror? A thriller? Family drama? The truth is, is that it is all of those things, at once. There is certainly jump moments in it and tense stand offs, but it also has real, hard truths running through the core of it. Its exploration of themes like; actions and consequences, changing personality’s and the morality of revenge really set it apart, and makes sure that you don’t leave The Gift at your cinema seat. It follows in your mind for many days after. 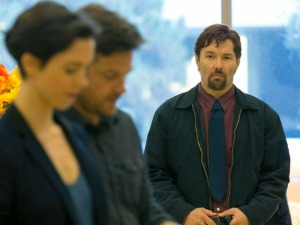 The gift tells the story of a married couple, Simon and Robyn, moving to a new house in Simon’s home town. When a casual meeting with old acquaintance turns into something more akin to stalking, confrontation strikes, the stakes escalate and you get an intense final showdown.

The acting in the film is 100% on point. Rebecca Hall, who plays Robyn, gets most of the screen time and is a very likable and sympathetic protagonist. But the two stand out performances definitely go to Jason Batemen as Simon and Joel Edgerton as Gordo. Gordo is just creepy. His presence is always eerie and Joel Edgerton’s performance is unnerving. But somehow it’s hard to hate him. His past redeems his motives, but they don’t redeem his actions, so you come out unsure on your feelings on him. This is also to do with Jason Batemen’s counterweight as Simon. Simon, initially, fades into the background. He’s the horror movies soothing boyfriend, sure to be killed off by the knife-wielding maniac. But that’s not how events turn out, and the revelation of his past, brings Batemen to life. Soon enough you’ll despise Simon with an intensity, but his eventual comeuppance leaves you with an uneasy feeling in your gut. An eye for an eye and all that.

Edgerton (who wrote and directed the film, as well as starring) has really crafted a beautiful film here, with real depth and a real chill to it. In between big box office super hero’s and Adam Sandler comedy’s, The Gift stands unique, and is definitely worth your time.

2 Responses to Movie Review: The Gift