Posted on November 30, 2015 by wavemotionfist 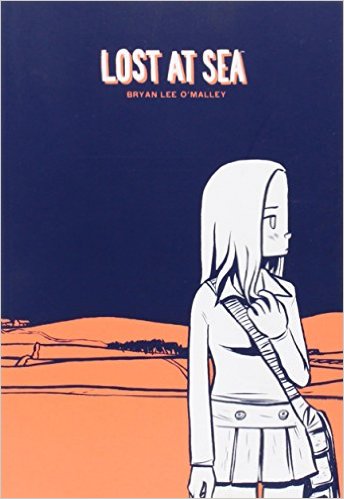 Bryan Lee O’Malley’s first graphic novel Lost at Sea was quite a disappointment to me. I’m a big fan of O’Malley as an author, Scott Pilgrim is obviously a hipsters bible and his most recent effort Seconds is brilliant in its time travelling philosophy. But while Lost at Sea has the same charm as those two novels which comes from O’Malley’s very distinctive and charming art style, the story for me felt too soppy with little real substance.

Lost at Sea is a coming-of-age romantic drama about an 18-year old girl named Raleigh. The story follows Raleigh on a road trip back home to Vancouver with 4 school friends she barely knows after visiting her boyfriend in California. During this trip she has an existential crisis believing her soul is trapped in the form of  a cat.

There is some quality to the story and moments that I resonated with but overall I got the sense that O’Malley was trying to hard to be emotionally moving. It all felt a bit too over the top for me. Raleigh examinations of herself feel genuine but bar that it didn’t feel anything other than typical teenage awakening. She’s becoming aware of herself in love and in independence but that’s not really interesting or unique enough. The questions she asks are questions most teenagers will ask at that age, but being that it is long in the past for me it just tended to become monotonous and droning.

We don’t really get long enough to particularly like Raleigh or her accomplices on this road trip so I definitely feel that had an effort on my ability to empathise with her. The humour in the novel was also hit and miss for me which was unexpected from an O’Malley novel.

Overall it feels very much like this was a first draft. A good first attempt and a glimpse at what was to come but nothing more than that. If you haven’t read it you aren’t missing out so I’d only recommend for those that are diehard fans or for those that really like O’Malley’s artistic style.