Ultimate Team: EA take the fight to the coin sellers.

Posted on September 15, 2015 by wavemotionfist 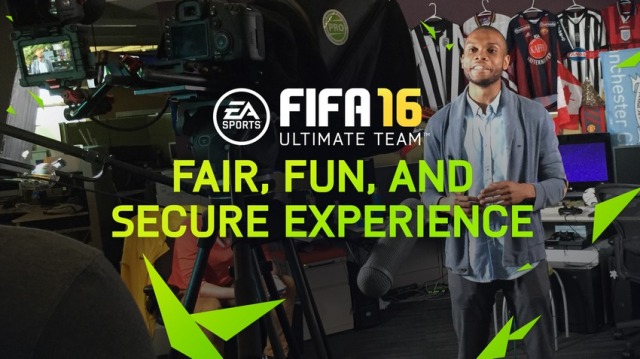 There was some big news on the Ultimate Team front last night regarding EA’s handling of coin selling and buying. Last year coin selling on FIFA 15 Ultimate Team really exploded like never before. You could get a million coins on PS4 for, at times, around £6. This meant that every man and his dog had millions of coins. This, in turn, brought inflation on an unprecedented scale. Ronaldo and Messi hit 15 million coins and disappeared. Then of course EA brought out price ranges which brought their own problems, the two main ones being player extinction and being stuck with players you’re unable to sell.

Basically the market was incredibly volatile and basically broken at times. EA wants to avoid this with FIFA 16 and have introduced a couple of measures to do this. The main one is the splitting of the markets. On last years game, the PS3 and PS4 and xbox one and xbox 360 markets were shared. While that is good for maintaining a healthy market, especially on the older generation of consoles, it brought a massive issue with it. The vast majority of what EA calls ‘fraudulent coins’ were generated on old generation consoles that were jailbroken or hacked. These ‘fraudulent coins’ that were made on the PS3, for example, could then be sold to PS4 users. To stop this EA has split the markets, meaning each console has an individual market. 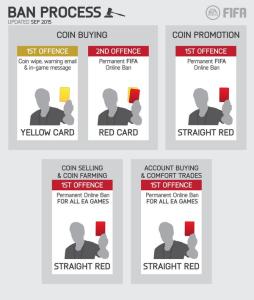 The punishments for coin buying, promoting and selling.

Now that is a big middle finger to old generation users, whose market is more than likely going to be trash. But for EA, understandably, the current gen is the priority. Another thing that EA has introduced is tougher sanctions on coin buyer and sellers, including first time bans for promoters, sellers etc.

A second big point is that price ranges are indeed in FIFA 16 but EA has stated that they will start out very wide, allowing for easier trading and a more natural economy. However, they point out that if coin buying is still prevalent then the price ranges will be tightened.

Ultimately though, coin selling is too big of a enterprise now for me to see this working. Yes initially prices for coins are going to be high, but for the coin sellers this is their job and their livelihood. They’ll find ways of generating coins, they always do, and exploit the wide price ranges while they can. EA has split the market, which is the main issue for coin sellers right now, but it’s clear than EA can’t fix the coin glitches, so it’s inevitable that coin selling will be present.

One thing that EA is desperately avoiding is actually lowering the prices of the FIFA points. FIFA points have always been too expensive for what they offer and it was the main reason why coin buying was so attractive last year. Why buy FIFA points when buying coins offers 40x the value. If EA gave you more value for money, coin buying would be a fringe issue, but of course EA cares more about profits than making a sustainable game.

It’s impossible to predict the state of the market that’s coming in FIFA 16. The FUT Draft seems like it will introduce a new, higher influx of coins to the market then ever previously, combine that with coin buying and we could have a mess on our hands. Extinctions are a distant possibility, as is unsellable players and if this is the case right off the bat then it will really destroy the experience.

It’s only two days before the web app is live so we’ll find out then. Exciting times all round.

What do you think of EA’s coin selling measures in FIFA 16? Let me know in the comments down below.