Posted on September 8, 2015 by wavemotionfist

Superior is a curious graphic novel. It does a lot of things right but it also seemed to do quite a few things wrong. It’s a classic Mark Millar (Kick-Ass, Wanted) affair, in that it is very teen appealing but also very sharp and cutting edge.

It focuses on Simon Pooni a frustrated 12 year old suffering from Multiple Sclerosis. One day, after seeing the latest Superior film (a Superman Clone) he is approached by a mystical space monkey who offers him the opportunity to become a real-life Superior for a week. Simon gladly accepts and takes to solving crimes, international warfare and dealing with childhood bullies.

There’s a lot of great things about this graphic novel. Simon is an interesting main character, the idea of being given this complete and overwhelming freedom after being so confined really resonates. His interactions with Maddie, a journalist always hot on the tail, and his best friend are some of the funnest parts of the comic. There’s a lot of room to work with the characters and I felt a little bit disappointed that this was just a mini-series. 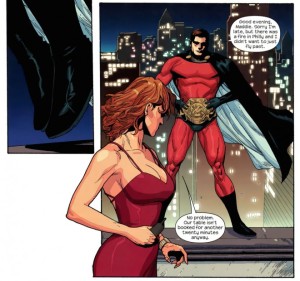 Superior and the obscenely busty Maddie.

The antagonist, Orman is a very interesting character, he’s built up with a mystery which is then replaced by bluntness and a frightening openness. At the same time I feel the ending definitely let him down and was too convenient for my liking. The artwork is awesome and the expressions of the characters are wonderful. Though I think the constant shots of huge breasted women, Maddie included, was a little unnecessary and took away from the sincerity of the novel.

There is a lot of cliche in the book and moments where it felt like Millar was sticking within the lines. But Superior is a wonderful read with a lot of potential if Millar ever decides to revisit it.